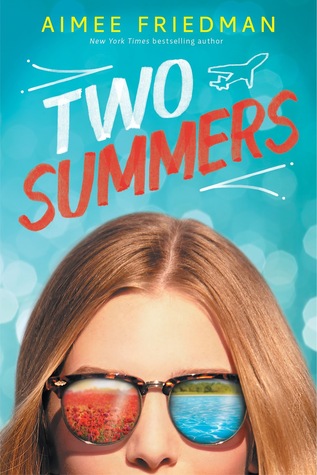 Where do I begin with this story… my overall reaction is that I wanted more from it. It was SO SLOOOOOOOOOOOOOOOOOOOOW. It took a good hot minute for it to get anywhere. It was completely predictable and not that exciting.

Short recap: Summer is getting ready to board her plane for France to spend the summer with her Dad. Minutes before she boards, she gets a phone call. Should she answer it? Should she ignore it? This story splits into two parts and answers those questions.

I know I may be a little harsh on this one but bear with me. It was a very neat concept and I love the parallel stories. I just wanted to be completely captivated during the story as it unfolds and the two endings come together. This story just did not do that for me. Both stories were painfully slow and totally predictable. I figured it out very early on so there was no big shock at the end.

The characters stood out to me the most. Summer is such a meek character that it was aggravating. I wanted to sit her down and have a come to Jesus talk with her. This girl could not function daily without her best friend telling her what to wear, what to eat, how to breathe, and so on. It was maddening! How had she made it so far in life with someone telling her what to do? Did this girl have to sense of self? The short answer is no. She had zero self esteem and zero confidence. I don’t care when universe Summer was in, in France or at home, her character was weak. Maybe it was because of her age (she was only 15) but she acted like Ruby not liking her was the end of the world. Also, she acted like a complete moron when a cute boy talked to her. How does a character not have any chill? That may be from the fact that she was glued to her BFF’s hip. Those two were never apart and therefore Summer never knew who she was on her own. Hence this story. TA-DA!

Summer’s BFF, Ruby, was a huge bitch. There’s no other way to say it. This girl had issues she chose not to address. Same goes for Summer’s parents who were hypocrites. I didn’t like them AT ALL. It felt like they both used Summer to get back at the other and then put her in the middle of their fights. What parent does that?! Awful. They were also making snide comments about the other to Summer. Example, her mom would say phrases like “Don’t expect much from your father. You’ll be disappointed.” BITTER MUCH? How about you calm down and let your daughter make up her own mind?

The last character I’ll mention is Eloise, the girl Summer meets when she goes to France and finds living in her Dad’s house. This girl had a subscription to her issues. I think her story either needed to be explored more or toned down a lot. The girl was crying in her shower all of the time. There was so much jealousy between Summer and Eloise that it was unsettling. There was no need for that in this story. It served no point.

Characters aside, this story bored me to tears. I just wanted it over with. I saw the ending coming a mile away so there was no surprise at all. Summer felt like a super dense character that wouldn’t find her nose on her face unless someone told her it was there. She was clueless and it was annoying. I felt no character development from Summer or anyone else, no matter how hard Friedman tried to wrap everything up with a nice bow. The ultimate question has to be asked: Which story was the real story? The world will never know. The better answer is, “Who cares?” Everyone ends up in the same place no matter what. In France, Summer just gets a little “curvier” with all of the food she eats, while hometown Summer learns how to use a camera properly and the people she made fun of with Ruby really are good people. Hmmm.. tough one there, Friedman. In the end, I would have picked the France Summer story. Maybe if that had been the main story and vetted out further it would have worked better than what I read.

By now you’ve picked up that this book didn’t work for moi. This story felt unfinished and like it needed to go through a couple more rounds of edits. There was too much girl hate in this story and that was unnecessary. Aren’t we trying to stop that? I wanted a stronger MC and was annoyed with how pathetic Summer came across. I wouldn’t recommend this to anyone, no matter how quick of a read it is.