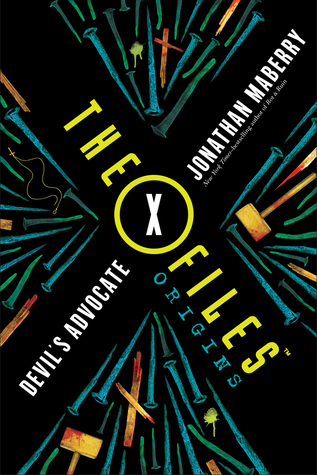 Excuse me for one moment while I let this out. This was not the story I wanted or needed. This is not my Dana Scully’s origin story. I won’t accept this or acknowledge it. #NotMyScully

Ok, I feel a little better now. This felt like a joke, if I’m being honest. After the great story of Mulder, I had high expectations for Scully. Maybe that’s my fault for being excited or thinking Scully would get the story she deserved. NOPE. This was boring, predictable, and laughable.

Short recap: It is the summer of 1979 and teenage Dana Scully thought her summer was going to be boring and quiet. Instead, serial murders, occults, and conspiracies pepper the news. Scully suddenly finds herself in the middle of one of those serial murders.

It is no secret I was hesitant to start this book. I have such a deep and unashamed love for these characters that anything that doesn’t do them justice will not sit well with me. The biggest fear I had was Scully’s story was being written from eyes of an author I haven’t read anything by before. Sure, I was worried about Mulder’s story but that actually came out really well. After reading this, I was right to be worried. This was everything I feared it would be.

The overall plot of this story was boring as hell, predictable, and downright dull. This is Scully we are talking about! This character deserved to have a story for the ages. What she was given was depressing. The characters themselves did not feel developed at all. It felt like bland characters going through the motions of what should be done and said. They were forgettable and lifeless. I always pictured Scully as this outspoken rebellious teenager that knew what she wanted out of life. She knew her path and would not stray from it. THIS Scully was not what I pictured or even wanted.

Maberry wanted me to believe that Scully was big time into yoga, new age shops, and believed the teachings of a guy that called himself Sunlight. HA. HAHA. AHAHAHAHHAHAHA! Laughable! It felt like a cop out. Sure, that was stereotypical for 1979 but why did Scully have to be so stereotypical? She was supposed to be badass! How could the character Maberry portrayed turn into the everloving skeptic that we all know and love? It surely cannot be because of this story because that’s a load of horse crap. He also threw in so many random “facts” and scenes that it made me question why I was even reading the story. He had Scully taking martial arts classes. REALLY? She never once mentioned that in the actual series. She never referenced it at all as an adult and it certainly never came out during her numerous struggles with bad guys. And Maberry also had Scully undergo a psychic “experience” for the first time. Uh… no, Maberry. All of the no. Adding that into this story completely underminded the weirdness that Scully will experience with Mulder when this really happens for the first time.

The ending and the ultimate reason why Scully (supposedly) became a skeptic was because of the BS piled in this book downright made me mad. You have to be joking, Maberry. It boils down to this: Scully is a skeptic because she has always been one. She does not believe anything easily.  She needs proof. She’s a scientist and a damn good one. Her faith is what kept her balanced but her need for order and reason made her into the non-trusting soul that she is. Look at that. I just rewrote the book for Maberry. It really wasn’t that difficult but Maberry made it difficult. What Maberry missed the boat on was deep diving into Scully’s family life. We always knew she was close to her siblings but why so much tension and distance between her and her father? WHY? Why couldn’t you go into that instead of handing us this weak “mystery” that was solvable in five minutes. I figured it out immediately so it really wasn’t rocket science. Stop trying to make something complicated that really is not complicated.

Everyone, please do what I didn’t do with this story: hard pass on it. If you like Dana Scully at all, do not read this. Even if you don’t know who she is, hard pass on it. This will not properly introduce you to the character and it certainly will not do her justice. It is a laughable attempt from Maberry to write a story about a beloved character. He missed the mark completely and I am kicking myself for having read it. Excuse me while I go rewatched all 9 seasons of The X-Files to wash away the horrid taste of this book.