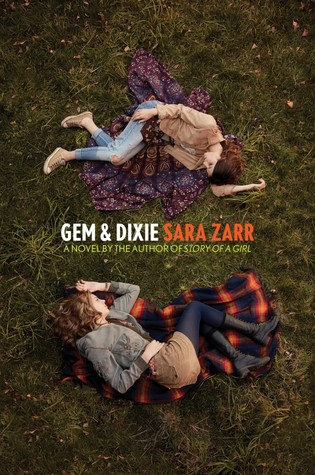 Holy crow my heart hurt with this story. I knew it was about sisters but this felt deeper and more powerful than just that.

Short recap: Gem and her sister, Dixie, have not had an easy life. Their father left when they were young and their mother all but gave up on them. Gem does the best she can to take care of herself and Dixie, even if that means doing what is not right.

From the very start, I was cheering for Gem. This girl had been dealt a crappy hand by the universe. Her mother is practically worthless and blames Gem for everything. Dixie, the youngest daughter, could do no wrong. Gem is the one fighting, working, and sacrificing to keep the family together. Their dad left years ago for the next million dollar idea and easy girlfriend, leaving behind the family he shattered. How can I not have my heart tore to shreds after a premise like that? Gem was such a strong character and I adored that. She pulled herself up by her bootstraps and did what needed to be done, even when she didn’t want to. She felt responsible for keeping what was left of her family together. She was constantly met with a disapproving mother and sister that thought she was overreacting. As for Dixie, I did not like her. She walked around oblivious to their reality. Dixie always thought her dad would come home and everything would go back to the way things were. She was living in a fantasy and it wore on my nerves. I wanted to slap her so hard. She was a bitch to Gem every chance she got and always took her mother’s side. She even bought her mother pain pills from kids at school so she could get high. What daughter does that?! The girl had a subscription to her issues. Their parents (I use this term loosely) were just as bad. Mom was in denial and blamed Gem for everything, whereas Dixie could do no wrong. Their dad comes back but only talks to Dixie because he is a con artist and knows how to pick his victims.

The plot of the story was a pretty good one. I was intrigued by the idea of their deadbeat dad leaving a backpack with thousands of dollars in cash under Gem’s bed. Gem wants to take the money and run but Dixie, being the brain dead twat that she is, wants to tell her parents. Are you mental, Dixie?! What a stupid idea. They should have just made a run while they could. Instead, Gem treats Dixie to a night away from home. They go to a hotel, order room service, watch movies, and just have fun. The entire time Dixie has a massive guilt complex and keeps wanting to “check in” to let her mom know she’s okay. Traitor. Idiot. Judas. She was the weakest point of this entire story. Everything she did went against what Gem was doing. It felt like she was pulling the entire story down with her, “*sobs* I just want things to go back to the way they used to be! *sobs*” bullshit. That got old fast. I kept wanting and hoping that Gem would drop her sister like a bad habit and move on. Did she? … I won’t ruin the surprise for you. But when you read this, or if you have already, come back and talk to me. We’ll trade frustrations. The ending did feel a bit rushed. The last 15% of the book was a whirlwind as Zarr tried to wrap everything up. I’m not the biggest fan of when authors do this.

I will leave you with this: this was a heartbreaking story and a hard reality for the way some families live. I believe this story needed to be told. There was a harsh realism to the struggle of kids today trying to find money for one meal a day thanks to less than interested parent(s). The reality that sometimes one meal a day is all kids will get. Or that they are forced to grow up far too quickly in order to save themselves. This story will kick you right in the feels so don’t go into this thinking it is a feel good story. I do hope people will give this a chance because it is a heck of a powerful reality check.

One thought on “Review: Gem & Dixie”