THE SHE-WOLF OF KANTA Digital Assets 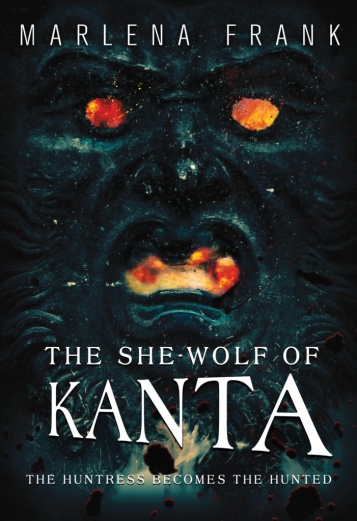 Title: THE SHE-WOLF OF KANTA

“A pair of yellow eyes caught the moonlight and locked onto hers.”
Mercy has always dreamed of becoming a werewolf trapper like her father. In Kanta, one must learn how to survive one way or another. A dark-skinned, blue-eyed young beauty, Mercy understands that she brings out the beast in monsters and men. When a routine werewolf delivery turns into a vicious assault from a pair of human traffickers, Mercy’s life changes forever. Somehow she must endure in a dangerous city where women and werewolves are hunted.

Mercy meets her first werewolf in the wild, much to her dismay.

The crickets were deafening as moonlight streamed down through the branches. Mercy’s pulse rang in her ears and her entire body was tense. Her left calf kept cramping up, but she ignored it. A moment’s delay when the beast showed its face could mean a gory death. She couldn’t fail tonight, not after months of practice. Behind her she knew Father was watching, and she wondered if he felt as nervous. The forest was deceptively peaceful, but Father said they were close, and that if she remembered her training, she could hear them, too.

She got into position in the middle of the clearing with her foot poised above the pedal switch. She tried to calm her mind and focus. The clamor of crickets surrounded them, but that was merely wrapping the noises beneath. She tried to listen closer. She heard an owl in a tree, her father’s raspy breaths, and the heavy, padding paws of the beast stalking her. Her mouth was dry and her body began to tremble. Father had said she would panic, that it was a normal reaction to facing one in the wild for the first time. That was the deciding moment, he had said. She needed to keep control of herself, but that was so much easier when she knew they weren’t near, when she knew it was safe.

Then she saw it. Through a thick patch of bushes, a pair of yellow eyes caught the moonlight and locked on to hers. Mercy froze. It was said when you looked into a werewolf’s eyes, you felt how easy it would be to become its prey. Facing one required both a strong mind and a strong body. It was as much a mind game as a physical one, and never had Mercy felt so small and insignificant. She had a very sensible and primal urge to run away. There was no way to prepare for that moment, Father had told her. That was the gamble of going trapping to begin with, whether or not you would be able to contain the urge to flee. She felt her legs shake but forced herself to stay rooted to the spot. If she ran, both she and her father could be torn apart.

When the werewolf lunged forward, the only thing Mercy could think of was how big it was.

I write about strange creatures. Typically they shouldn’t exist, or they have bled through from a different reality, or they’re pretending to be a crying baby in a crib. Sometimes that lands my stories in horror and other times in fantasy, but there’s always an air of strangeness to my tales. If you want to get a better feel for what I’m talking about, check out a few clips or read a few drabbles.

My work has appeared in a spattering of short story collections, but I do have a few novellas and novels in the pipeline. Other than talking about writing, I also talk about cryptozoology, werewolves, wildlife conservation, and of course kitties. I’ve also been known to nerd out about Batman and The Hobbit, and have recently discovered the cracktastic fun of Black Butler cosplay, so there will likely be more of these incidents.

By day I work as a web developer, so I’ll occasionally talk about web issues like finding the right theme.

One thought on “The She-Wolf of Kanta – Excerpt and Giveaway!”