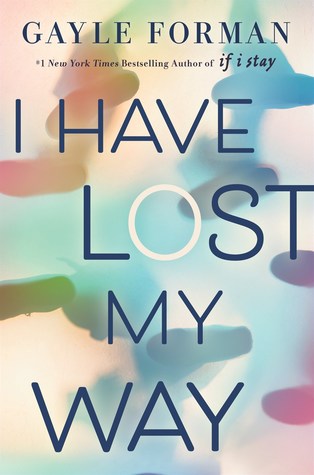 I was so excited when I heard Gayle Forman was publishing another novel. I am a fan of her If I Stay series and the Just One More… series. Sadly, I don’t believe this hit the same level as her other stories.

This story is told from three POVs – a semi-famous singer that has lost her voice, a POC teen that is struggling to come out to his parents, and another teen boy that was raised by a father with several mental issues. The way their stories intersect is odd at best. It never seemed believable to me. She fell off of a bridge and landed on the boy who was raised by the unhealthy father, and it was all witnessed by the POC teen? They all went to urgent care together and formed a tight bond after that? You have to sense my hesitation and struggle with all of this, right?

Their individual stories were interesting but together it was just random and awkward. I get what Forman was trying to do – have these three random come together so they can realize they are not alone in the universe. They were all supposed to help the others get through the toughest times in their lives. I get that but I just don’t feel it was executed properly. I tried to connect to the characters but it did not happen for me. There was one story that got me more than the others – the boy who was raised by a mentally unstable father. His story was heart breaking but it felt overshadowed by the other stories. It felt like it was a back burner story, one to make the reader feel for him. Well, it worked and I wanted to know more about him – like why his mom disappeared and left him to be raised by someone everyone knew was unstable. Why did nobody check on him? I just had so many questions. The other two teens? Eh, not so much.

The ending also did not sit well with me. It felt incredibly open-ended and left so much unresolved. Maybe I am just supposed to come to my own conclusions and be good with it. Who knows. I do know that everyone’s stories felt unresolved and they were over too quickly. Overall I just did not connect to any of the writing or the overall big picture story. This book had its moments but it just was not what I was hoping for.

One thought on “Review: I Have Lost My Way”