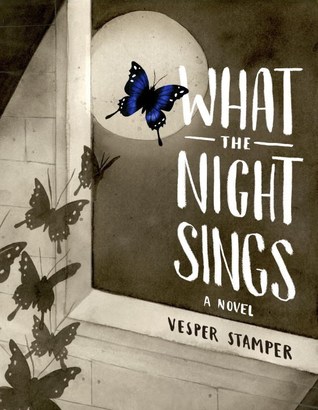 As I have mentioned in previous reviews pertaining to and involving the Holocaust and WWII, the stories can often be hit or miss. I do mean that with all due respect as the topic itself is an important one. It is important and necessary for the history and stories to still be told. That being said, I had a hard time connecting with this particular story.

Short recap: This is the story of Gerta and her life during the war. Gerta is a viola player and but prefers to sing. When the war starts, she struggles to understand why she can no longer go to school and must be taught at home. Shortly after, Gerta and her father are sent to a concentration camp and Gerta still struggles to make sense of everything. She loses her father but manages to keep her viola, which happens to be her saving grace.

Gerta’s story was sad and full of heart ache. The girl lost her father and held on to what she knew to comfort her – music. She was forced to survive by any means necessary during one of the darkest times in World History. While those stories are still necessary, I had a hard time connecting to Gerta’s story. Why? I felt it was not a fluid story. It came across choppy, like an inconsistent thought. I wanted to know more about Gerta and her life during/after camp but instead, it was small sections of her life during those times and more on her trying to figure out where her life is going to go after the War ended. She spends a lot of time chasing Micah, a boy she has a crush on. She crushes on him for a while and is constantly pursued by Lev, a fellow Jewish boy who really likes Gerta. It is clear that Lev and Gerta want different things out of life but Gerta quickly changes her mind and does end up marrying Lev.

This was an somewhat interesting read but I felt it was rushed, and again, choppy. I didn’t like the inconstancy of Gerta’s character. I also was not a fan of, what felt like, a strong focus on romance. It felt like Gerta spent a lot of time trying to figure out who she was going to marry. She was constantly told by Lev what her place as a Jewish female was and it felt like she finally caved in and stayed with him. I may be completely mistaken and if I am, please tell me. I will always admit if I’m wrong.

This just did not feel like the story I expected. I’m not sorry I read it but I am still scratching my head at what I read.

One thought on “Review: What The Night Sings”