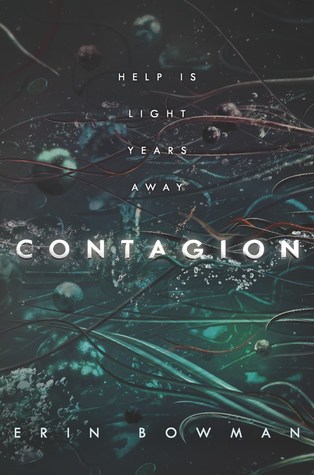 If anyone knows me, they know dystopian/sci-fi books are my JAM. This? Well… I wanted it to be my jam but sadly I had the toughest time connecting with any part of the story.

Short recap: This is the story of a mining ship crew responding to an SOS sent from what appears to be a deserted planet. The crew had no idea what kind of horrors they were heading to. They quickly discover the planet is full of lies, deceit, and very dark things that go bump in the night.

I have been struggling with this review because finding the right words to properly describe why I couldn’t connect to this story are escaping me. Maybe it was a combination of everything – less than mediocre story of space zombie mixed with an oddly placed love story. You read that correctly, everyone. There’s a love story trying to bloom while the crew of the ship is trying to fight for their lives against zombies. I mean, sure, it could happen but the timing really doesn’t work. I don’t believe I need to go into more detail.

The other thing about this story that made it difficult for me to enjoy was the amount of POVs. The story itself is told in a third-party voice but there are just far too many POVs. There are no less than six individual voices throughout the story, along with random short chapters from the POV of the zombie creatures. There are countless chapters like this so that means the number of POV chapters increase. If you want to talk to me about absolutely unnecessary and pointless, you come talk to me about those chapters. I did not care one iota about a 30 second narrative from someone that was bitten and going through The Change.

I do adore the author and she can typically write compelling characters, but I could not find them within this book. There are plenty of characters to be had here. The cast of the ship was very diverse and only somewhat interesting to read about. There was nothing that stood out nor was earth shattering. Everything about them came across as predictable at best. Their voices never truly sounded distinct so they all sounded the same after a while. That made it even harder for me to connect to anyone. I fell into my usual pattern of not caring what was happening to this cast of misfit crew members.

The overall plot was an interesting concept but the execution fell short of the intended mark. This was not a thrilling or gripping story for me. I was eye rolling more than anything because most scenes came across as campy rather than chilling. While the gore and bone-chilling terror were lacking from this sci-fi novel, the action was not. I will not and cannot fault Bowman’s ability to write a good action scene. Because I was unable to connect, the thrill that was necessary to make me feel this story never hit home with me. I wanted so much more from the story Bowman gave me. She hinted only at political intrigue and corporate conspiracies, but they felt like barely spoken words overheard while walking by someone. Only enough to make you think you heard it but no way to know for sure. I do hope Bowman expands on these in the next book because I really wanted to know the WHY behind the events that took place.

Sadly this book did not do it for me. I kept waiting for my hair to be blown back and goose flesh to happen. I’m still waiting, in fact. I am still undecided if I will continue with the series because this felt like a lack-luster series starter to me.

One thought on “Review: Contagion”