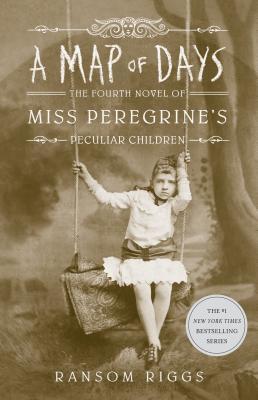 I do love this series and admit I was more excited for the series to continue than I care to admit. I did listen to the audio of this and it read just as well even without the creepy photos. This was an interesting take on the story and I’m curious to know where it goes.

Short recap: The Peculiars have to learn to live in the real world and turn to Jacob for help. Jacob is going through his own issues as his family wants to have him committed. Jacob soon discovers what his grandfather really did in the world of Peculiars. Will Jacob leave his parents behind to go on one last mission to be like his grandfather?

This book was intimidating, there is no doubt about that. The audio was over 13 hours (at 1x playback) while the physical book pushed 500 pages. It was still a fast paced adventure that had me guessing at every turn. Of course I would never guess to know what Riggs was thinking when he wrote the book so I could not begin to speculate where the story would lead. What I can tell you is that the cast of characters you came to know and love in the first three books are back and better than ever. They all had wonderful character arcs and continued to surprise me as they began to grow into their own. They even started to question authority, which was refreshing. Miss Peregrine did have a part in this story but not as big of a role in past stories.

There was one small complaint I had about the story – there was a scene that felt almost like a direct rip-off of Harry Potter. If you have read the story, I think you know what I am talking about. I do not always feel the need to compare everything to my beloved HP but when it feels like copying someone’s test but changing enough so the teacher doesn’t know you copied word for word, then I have to give pause and question. It did sort of help the story along but in the end it did not feel like it made any difference at all. It was hardly referenced after the characters moved past that particular place. It made me wonder why it was even included unless it will have a bigger part in future books.

This was still a fun read and I was excited to be back in this world. I am curious to see how the series continues. I can only hope that the Peculiars will have further development rather than just how Jacob perceives them. I know that would be difficult as it means there would have to be multiple POVs and this story just isn’t set up for that. A girl can hope, right?

2 thoughts on “Review: A Map of Days”