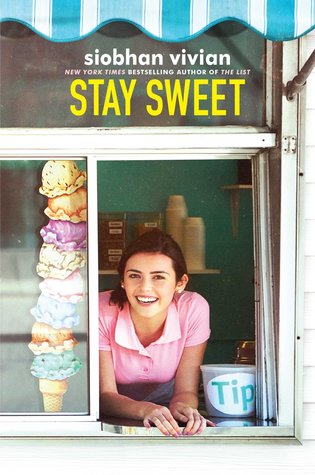 If you are looking for a light and fluffy read that will leave you feeling good, this is the book for you. I was able to finish this in one day and it was exactly what I needed to sort of cleanse my palette before starting a new book. Be prepared to really want ice cream while reading.

Short recap: Amelia cannot wait to work one last summer at Meade Creamery. She has worked there every summer and this year she will be Head Girl, a very prestigious honor. With her best friend, Cate, by her side, this should be Amelia’s best summer until things change: Molly Meade passes away suddenly and new management threatens to change everything at Meade Creamery and it may not be for the best.

I felt the characters were the biggest part of this story. Who doesn’t like a contemporary story that showcases teens finding themselves and discovering who they really are meant to be? I know I do. The protagonist, Amelia, was a little tough to deal with in the very beginning. At the start, I could not wrap my mind around why she was so hung up on this summer job. She took it far more seriously than I ever took a job during my teenage years. It was never clear why she acted the way she did other than she was proud of the Creamery and the history behind it. Okkaaayyyy but still. Not liking her in the early part of the story did not stop me from reading. I am happy to say she did get better and actually grew as a character the more the story continued. Her best friend Cate was another story. I was not a fan of her from the start. Cate came across immature because she was passed over for Head Girl. She became a snotty, nasty person who was only out to be popular and prove she was better than her (supposed) best friend. Talk about unnecessary.

Now, there is a romance within the pages of this book but I won’t talk much to it. Why? Because I felt it was not necessary to the overall story. For me it did not add anything to Amelia’s story and her quest to save the Creamery. I didn’t feel gooey over the budding romance simply because I didn’t connect with the male character that way. Just be warned it is present.

This was one story that I am really glad I read. It was just as sweet (no pun intended) as I hoped it would be. Let’s be honest – I really was in this to find out what that secret ingredient was! The rest of the story was a bonus. I finished this wanting a pink polo from this Creamery and a big bowl of ice cream.