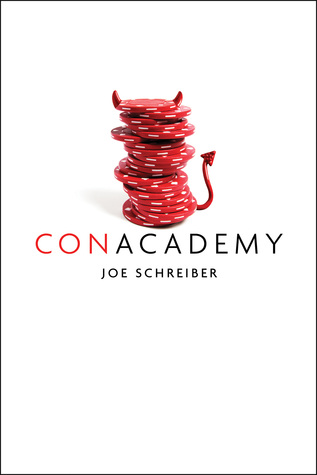 This book had been on my Wish List through my library for a while. I’m a sucker for a good mystery/thriller story so I finally decided to give this a chance. That might have been a mistake because this was not what I expected.

Short recap: Will has just started at a very elite private school for the wealthy, privileged, and spoiled rotten kids of the North Eastern part of the country. Will has a secret that nobody knows about – he conned his way into the school. Well, he thought nobody knew until Andrea called him out on his cover story. Shortly after Will realizes that Andrea is a con artist as well. These two make a bet to see who is the better con artist.

I know my description is a little choppy but it was the best I could do because my thoughts on the book changed after I finished. I was excited to start as it was promised to be like Ocean’s Eleven but I’m here to say it wasn’t anything like that. It felt like an underdeveloped attempt at a great YA con/thriller. I had so many issues with the entire story.

First, the characters. I never connected with Will or Andrea. I didn’t care what happened to either so I couldn’t cheer for either to win. Will was an arrogant prick that talked like his poop didn’t stink. He had a very high opinion of himself. At the same time, Andrea had a higher opinion of herself. Her arrogance knew no limits. I found myself wanting to punch her on several occasions. Why Andrea felt it necessary to challenge Will was beyond me. Both of these teens managed to con their way into this elite school so why not let bygones be bygones? They weren’t really hurting anyone and both could have gone on without bothering the other but OH NO, Andrea couldn’t live like that. She immediately felt threatened by Will and went for blood. I just didn’t understand that. The third character that had a large part was the girl Will fell for – Gatsby. That’s right, her name was Gatsby. This girl felt like she was there for a forced romance. She did nothing to help move the story along. She was just as underdeveloped as the rest of the characters.

The actual bet proposed by Andrea was pretty typical. There was nothing unique or thrilling about it. She picked the target – who just happened to be the most popular and richest jerk in school. Whoopie. I just could not find a way to care that they were both trying to con $50k out of the kid who was allowed to invest and trade real millions of dollars from his family’s estate. The way they both went about trying to get the money was absurd. Conveniently Will had all of these connections to an online fake gambling poker website and had no problems setting things up to get the $50k. At the same time, Andrea played the head over heels girlfriend who was captivated by the rich boy. All the while, Andrea had her own secrets that are revealed at the end that will did nothing more than caused me to roll my eyes.

I know I’m not giving a glowing review of this story but I seemed to enjoy it enough to finish it. Maybe I just wanted to see how it would play out, who knows. I know the ending was super rushed and weak at best. Too many things were trying to happen at once and as a result, it was jumbled. Would I recommend this story? No. I cannot recommend anyone to read this as it was not as developed as it could have been. The characters needed more depth and the plot needed more work. I am thankful I was able to borrow from the library and did not spend my money on buying a copy.